By faith Abraham, when he was called, obeyed by going out to a place which he was to receive for an inheritance; and he went out, not knowing where he was going.

One of the things I love about opening the Word is that I am never quite certain where it is going to take me.  Take this week for example:  I sat down to look at Abraham’s mentions in Hebrews thinking that I would probably need to look at his faith in two parts – Abraham’s life of faith in a strange land (v. 8-10) and Abraham’s faith in God’s promises (v. 17-19).  As I dug in, however, I realized that there was a lot being said in verse 8 alone, things that needed to stand on their own, things that I needed to hear.

So now, we’ll be looking at Abraham’s faith in three parts.  And we start with his first steps, when he was still Abram:

So Abram went forth as the LORD had spoken to him; and Lot wen with him.  Now Abram was seventy-five years old when he departed from Haran.

Let’s look at Abram’s situation:  He had once lived in Ur, where one of his two brothers had died [Gen 11:28].  He and his father then moved to Haran, over 600 miles away, where his father then died.  We don’t know where his only remaining brother was living at this point, whether he was still in Ur, or nearby in Haran.  And the LORD told him to move again, this time further away from all he has known.

God called him into an unknown land in more ways than one.  His travels thus far were comfortably along  the Euphrates, in a land with steady water and pastures.  Going toward Canaan meant leaving the security of the river lands.  It also meant leaving connections, culture, and all that was familiar to him.  God was calling Abram to go into the unfamiliar, and to go it alone.  Well, him and all of his massive household, but still this was a daunting prospect.  Abram had a few choices:

Abram picked up and went.  Maybe it was because he had actually heard the call long before while living in Ur and knew all along that Haran was only a detour on the greater road.  Or maybe Abram knew God well enough to obey without question.  I don’t know, but obey he did.  And what I find most amazing in all of this is that little phrase at the end of Hebrews 11:8:

…and he went out, not knowing where he was going.

That kind of trust makes me uncomfortable.

Abram didn’t just go to the land of Canaan and camp out, waiting for God to fulfill His promise.  He kept journeying.  Abram moved through Shechem, Bethel, Egypt, Hebron, Bobah, Gerar, Beersheba, and, well, pretty much all over the land.

And, turns out, the journey was probably more important anyway.

It was on the journey that God reinforced and expanded His promise.

It was on the journey where Abram learned of God’s strength and provision.

It was on the journey Abram learned more of God’s holiness.

It was on the journey he saw God’s faithfulness, even after his own failings

It was on the journey that Abram learned how to pray.

It was on the journey that Abram became Abraham.

For Abram to hear God’s call and go without question is inspiring, but his faith in following God through the unknown is, for me, the greatest example.  Sure, Abram made his fair share of mistakes.  And you know what?  Abraham didn’t really ever make his destination.  He never fully settled, he never fully took possession, he never fully saw the fulfillment of God’s promise, but he kept on journeying.  And God used the journey to make Abram into Abraham, to bring him into the identity that He had for him all along.

You know how I said that this kind of trust makes me uncomfortable?  When I look at it, I actually sort of like this kind of uncomfortable.  Because, more often than not, this kind of discomfort means growth.  The past year, I have been slowly progressing toward what often seems like an unattainable goal.  Sometimes I think of the comfort and security I might have if I had chosen not to follow God’s call for my life.  Sometimes I wonder if I’ll ever make it.  But one of the things I have witnessed along the way is how God has used the journey to challenge and grow me.  So, even if I never reach the goal, I am becoming more and more thankful for the process.

God is so much more about the journey, and it’s not about where we are going, but who we are becoming:

…And so we are transfigured much like the Messiah, our lives gradually becoming brighter and more beautiful as God enters our lives and we become like Him. 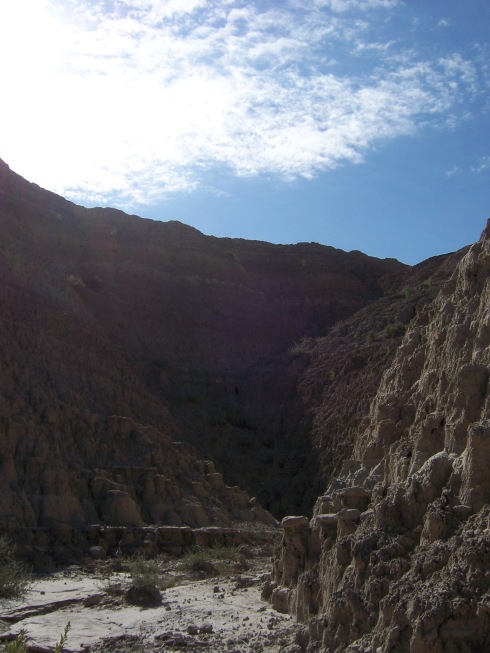