Did anybody else have this game growing up? 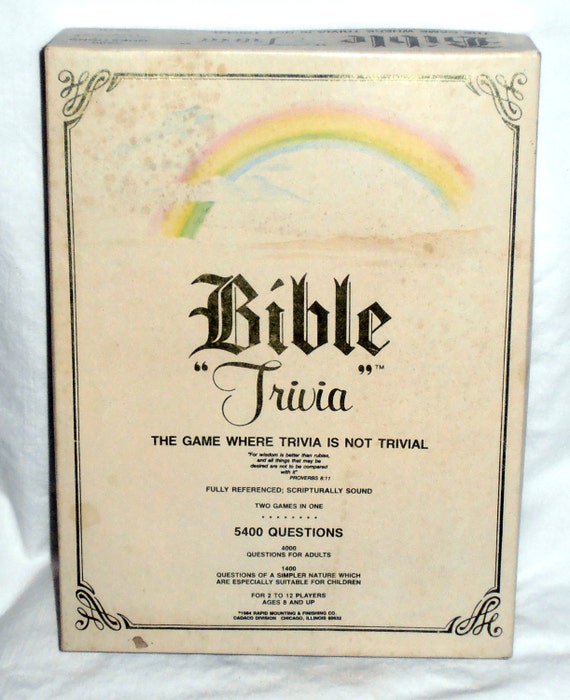 You know, the one with the board that looked like a Sunday School felt board: 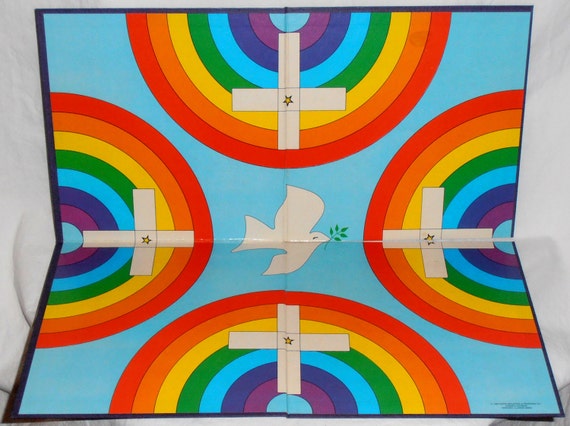 Four players only, get your own stinkin’ rainbow.

And the tokens that looked a little too much like communion wafers:

In our family, this game taught a very important lesson: Jesus is always the answer.

And then the answer is probably John.

Well, the next time you play, here’s one more name that will come in handy:

Enoch – father of Methuselah (him you’ve heard of).

Enoch – who only ever gets four mentions, and two of those are in genealogies.

Enoch – who gets quoted once, by Jude.

Enoch – the exception to the rule that life has a 100% mortality rate:

By faith Enoch was taken up so that he should not see death; and he was not found because God took him up; for he obtained the witness that before his being taken up he was pleasing to God.

Ok, maybe you don’t think exactly that, but I’m betting something pretty similar.  That is a high commendation indeed, isn’t it?  That God was so pleased with Enoch, He took the guy straight outta this world so they could hang out.  What is it about Enoch’s life that was so special?  We don’t have much to go on, but let’s take a look:

And Enoch lived sixty-five years years, and became the father of Methuselah.  Then Enoch walked with God three hundred years after he became the father of Methuselah, and he had other sons and daughters.  So all the days of Enoch were three hundred and sixty-five years.  And Enoch walked with God; and he was not, for God took him.

Do me a favor, open your Bible (or head on over here) and take a look at some of the other verses in that chapter.  Notice anything?  Did you see the pattern?  Throughout the chapter, as each new generation is mentioned, the structure repeats:

That formula repeats itself in this chapter eight times, but when it’s Enoch’s turn, the pattern changes.  The more obvious change is the ending, instead of “and he died” we get “and he was not.”  But there is another change, did you catch it?  Instead of counting the years that Enoch lived, it lists “Then Enoch walked with God three hundred years.”  The word used there switches from chayah  – meaning to have or sustain life – to halak – meaning walk or manner of life.  (Which I am pretty sure is the Hebrew equivalent of the Greek peripateo which is all over the New Testament. #biblenerd)

He has told you, O man, what is good; and what does the LORD require of you but to do justice, to love kindness, and to walk humbly with your God.

The implication in all of this is that Enoch’s manner of living was different from the other fathers in Genesis 5.  Where they had all existed, Enoch’s life was marked by his walking – and relating to God.  It tell’s us that Enoch’s priority was more than day to day survival, it was intentionally moving through life with God.

With all this talk of Enoch, I am reminded of another person (and great trivia answer) who had an unusual end: Hezekiah.

Hezekiah was the 13th king of Judah and, by all accounts, a good king.  A very good king.  So good that “after him there was none like him among all the kings of Judah nor among those who were before him.”  [2 Kings 18:5]

He destroyed places of idolatry and false worship. [2 Chronicles 31:1-2]

He reinstated Passover and worked to reunify the kingdoms by inviting Israel to Jerusalem to keep the feast together. [2 Chronicles 30]

He even kept Judah from being taken captive by Assyria as Israel had been.  [2 Kings 18-19]

So why isn’t Hezekiah listed alongside Enoch as a man of great faith?

I think we get a little understanding when we take a look at the end of his life:

In those days Hezekiah became mortally ill.  And Isaiah the prophet the son of Amoz came to him and said to him, “Thus says the LORD, ‘Set your house in order, for you shall die and not live.'” Then he turned his face to the wall, and prayed to the LORD, saying, “Remember now, O LORD, I beseech Thee, how I have walked before Thee in truth and with a whole heart, and have done what is good in Thy sight.” And Hezekiah wept bitterly.  And it came about before Isaiah had gone out of the middle court, that the word of the LORD came to him, saying, “Return and say to Hezekiah the leader of My people, ‘Thus says the LORD, the God of your father David, “I have heard your prayer, I have seen your tears; behold, I will heal you.  On the third day you shall go up to the house of the LORD.  And I will add fifteen years to your life, and I will deliver you and this city from the hand of the king of Assyria and I will defend this city for My own sake and for My servant David’s sake.”‘”

Hezekiah lived his life doing “right in the sight of the LORD.” [2 Chronicles 29:2] He trusted God, and kept all of His commandments. [2 Kings 18:5-6]   At the end of his life, though, Hezekiah didn’t rejoice to end his days on earth and begin them in heaven.  Instead, he prayed, “God, remember all that I have done for you!”

After his healing, Hezekiah writes a song of thanks to God [Isaiah 38:10-20], which contains such lines as:

“It is the living who give thanks to Thee, as I do today; a father tells his sons about Thy faithfulness.” [Isaiah 38: 19]

It seems that the greatest reward, in Hezekiah’s eyes at least, was health and blessing in this life.  In fact, when messengers from Babylon came with their “get well” gifts, he was quick to show them every last piece of his treasures.[Isaiah 39]  In fact, 2 Chronicles 32:31 tells us that God used the Babylonian envoy to reveal Hezekiah’s heart.  And what was revealed was the pride in his heart that caused him to miss true gratefulness. [2 Chronicles 32:25]

There is no doubt that Hezekiah lived rightly before God, but I think he missed out on the deeper life of walking with God.

And without faith it is impossible to please Him, for he who comes to God must believe that He is, and that He is a rewarder of those who seek Him.

Hezekiah lived his life doing things that would please God, hoping, I think, that it would produce rewards.  Enoch, however, lived by faith.  And pleasing God, it turns out, is a product of that faith.  When we look at Enoch’s life, there is no one “act of faith” that account’s for God’s pleasure.  Enoch walked with God and, as a result of that relationship, it was he, himself, that was pleasing to God.

And what of Enoch’s reward?  It wasn’t long life, or avoiding pain, sickness, or death.  No, Enoch walked with God and believed Him for the reward that is promised over and over and over in scripture:

But from there you will seek the LORD your God, and you will find Him if you search for Him with all your heart and all your soul.

So here are my questions for us:

If you can, I urge you to take some time and watch John Lynch‘s excellent talk on Trusting God v. Pleasing God.  It’s about 45 minutes and oh. so. worth. it.  I listen to it about once a year and every stinkin’ time it blows my mind.